Quote
At the end of the day, I believe that cancer treatment is not a sprint, but a team marathon.

Some common places become loaded with meaning when you have a child with cancer. When my 11-year-old daughter Erin was diagnosed with Acute Lymphoblastic Leukemia (ALL), it was truly "the phone call that changed our lives." Erin had fun in life. She was very athletic. She loved sports and spending time with her friends. She was happy and healthy. When she caught a cold after a soccer tournament, we were not alarmed. But since she was a little sicker than usual, we saw the doctor. She underwent a blood test, the result of which was announced to us during that famous "phone call." Erin began treatment that would last two and a half years and change our lives forever.

The good news was that Erin's cancer had a very high cure rate and that she could receive her treatments very close to us. We were so lucky to have access to such an amazing hospital and amazing doctors, nurses and other staff in Halifax, Nova Scotia! As was explained to us on our first visit to the hospital, on the day of Erin's diagnosis, it was not a single pediatric oncologist who was going to take care of her, but a whole team – one not only in Halifax, but also in 200 other hospitals around the world, everyone working together to find the best treatment for our children. Knowing that at least seven oncologists at the hospital and some 1,400 other physicians from around the world would collaborate gave me hope!

Erin's treatment was a "whirlwind of emotions" for us: from the intense joy, at the announcement of her remission, to the deep sorrow, when it was necessary to tell her that she would lose her hair that she had been growing for years. To withstand this whirlwind, we decided to celebrate every little bit of happiness and create some as needed to make up for the tough times. We threw a surprise party in the hospital room where she received her last of 60 thigh injections. And some days when she couldn't be in a big crowd, she went to the movies with a friend who was allowed to skip school. But the biggest celebration came during her last treatment, which fell on the day of the Light the Night Walk. We couldn't have asked for a better time to be surrounded by other cancer survivors, our family and friends.

At the end of the day, I believe that treating cancer is not a sprint, but a team marathon. I accepted all the help that was offered to us along the way. I tried to be physically and mentally strong to accompany Erin on this long journey. Sitting all day in a hospital room waiting for a chemotherapy treatment, blood transfusion or lumbar puncture, I didn't realize how exhausted I was. Sometimes someone would offer to play a game with Erin while I was going for a walk outside and it did me a lot of good. Or, I was offered to prepare a meal for myself or to take one of my other children to a chalet for a weekend, so that he could find a semblance of "normalcy", and it was a real relief. Even though it was a long ordeal and at times seemed overwhelming, I allowed myself to ask for help. If I have one piece of advice to give to parents who go through this, it is to accept all the hands that are offered to you, because seven years after this "phone call that changed our life, " we have the impression that everything happened, as they say, "in the blink of an eye!" 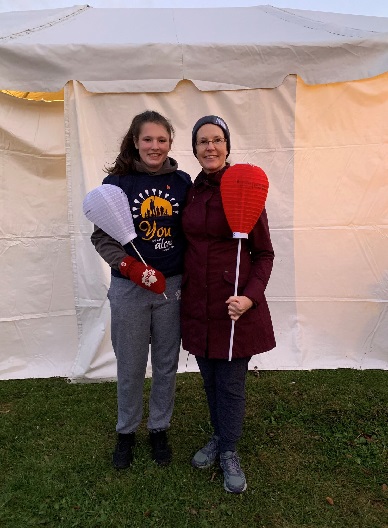 Quote
At the end of the day, I believe that cancer treatment is not a sprint, but a team marathon.
Here to help, contact us